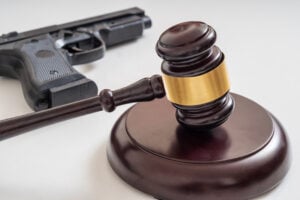 AR-15s. Banana clips. Serial numbers. Many things we associate with gun ownership simply weren’t a thing back in 1791. As times change, norms and the need to regulate killing tools adapt to circumstances that arise. But the law is the law. Last term, SCOTUS let judges know that no law, even the ones that have been on the books for over a century, should be able to get past the strict scrutiny of imagined Founding Fathers. This edict will likely have a disastrous effect on gun possession and illegal gun markets if this recent decision on gun serial numbers is a predictor of things to come.

A federal judge blocked a federal law on Wednesday that prohibits the possession of a firearm with an “altered, obliterated or removed” serial number in light of the Supreme Court’s landmark ruling expanding gun rights earlier this year.

This decision, unsurprisingly, is a shock to many. And, of course, by this I mean a shock to me. I have not, nor intend to do the interviews or the quantitative analysis required to arrive at a data driven justification for my claim of “many,” but hey, it reads as a lot more authoritative that way. However, I did do enough searching about the internet to discover that I am not alone in my dissatisfaction with it.

If criminalizing scratching off serial numbers is unconstitutional because there isn’t an analogous regulation from 1791 or 1868 that restricted the possession of guns with an altered serial number, then why is it illegal for me to possess an M142 HIMARShttps://t.co/1ZBEM8yYbZ

Gun control? Another idiot judge has declared anyone can eliminate the serial number on a piece because there was no such number when the constitution was written. Next up: Flush toilets.

Flush toilets notwithstanding, this is a shitty situation indeed. The main reasons serial numbers are on guns are so that it is easier to prevent illegal gun sales and to solve crimes.

You’d think that folks would realize that this is a clear set up for social harms, but no. Making it easier to sell guns on the black market is a no brainer if it can get cloaked in language about MuH LiBerTy, which is why this person was able to predict this happening seven months ago:

Next they’ll pass a bill abolishing requirements for a serial number to be on a gun. No background checks or license just walk in get a gun and walk out and when people do a school shooting an hr later cheer it on as gun freedom. Conservatives mind set is pro murder in all cases. https://t.co/faF6DHKjNM

Since the Bruen decision, the NRA’s beaming optimism about gun ownership being an absolute right has only been matched by the helpless terror in the pit of parents’ stomachs when they send their pride and joy to elementary school. And some NRA employee is grinning ear to ear right now.